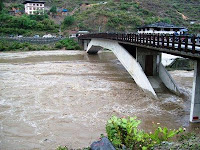 Heaven started tearing down on us for three days now and it felt very good until today. Rivers started to grow wilder and heaven seems to have more of it still. BBS announces the damages across the country, revealing the chilling picture of raging water touching the heights it never touched before. 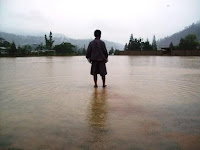 My school resides on the bank of Punatshangchhu, the mysteriously silent river which has the history of deadly flood. A few weeks ago we had to panic when the announcement was made of a potential GLOF from Lunana, that created fear and nothing more. But logically we know that the fate of our school lies by the bank of the river. 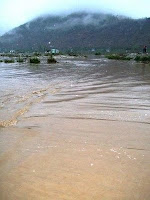 However this time it is very

unexpected! We casually watched the river change its color. By midday it swelled and between the clicks of camera apparent raise in water level was seen. As hundreds of logs came thundering downstream all eyes opened wide in fear. The school fencing which stood about four meters above the river level submerged and we soon lost the fishery to the river. 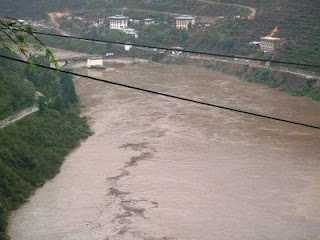 Up the road bajo thango the whole plain was submerged and the huge houses looked like boats with people already evacuated. Office-goers were still in gho and kira with their cars parked on safer ground. They watched the black top road disappearing under water.
Huge streams formed out of rough roads and cars are parked all along the road, not make their way to their usual parking.

The strong Wangdue bridge was shivering with ravaging water kissing its belly, threatening its strength. Official were keeping close watch over the water level and I was wondering, what they could do if at all the bridge fell? 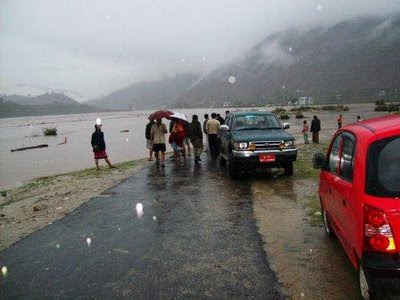 So far the Punatshangchhu seems to have done no great harm to lives and property, but the rain is still falling... One night more will cross the line, If tonight the rain keeps falling I don't want to wake up tomorrow morning to see what the river has done.
By PaSsu at 8:51 pm
Newer Post Older Post Home