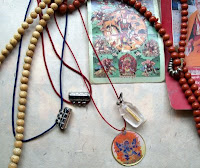 Soonkey means a holy locket, a tiny packet containing prayer stitched in silken pouch or a miniature statue or a picture of some god or just a foot long string, generally worn by Buddhists and even Hindus as protection from evil influences, just as Christians wear cross. Soonkey was a priceless gift pilgrims bring home from holy places like Dorjidhing, Tsho Pema, Lhasa, and even Bumthang Kuje, Paro Taktshang, and Paro Chumphu. Over

the time fashion influenced soonkey's designs; any piece hang-able on the neck becomes soonkey with blessing received upon it, making it worth commercial. Ironically even bullets are worn as soonkey! Many won't want to wear the bamboo piece from Paro Chumphu, once considered holiest. So this is a little bit about soonkey, but what is e-Soonkey?

This is my very personal invention and therefore must sound crazy to some. Though my faith in religion and god is deep rooted, I often

take some practices for granted, by choice or by chance. People give me soonkeys and I appreciate it so much but I hardly have it on my neck the next day, either it went lose or I forgot to wear it back after shower. What I don't forget to wear on my neck is my 1 GB Thumb Drive (you may call it Pen Drive or USB Drive). I don't remember a day I didn't wear it! Now the point is Why don't I get my Thumb Drive blessed and wear it as soonkey?

Logic behind the idea is no just I-don't-forget-to-wear-it but that 1 GB space can hold hundreds of pages of prayer, hundreds of Kupars, and religious symbols along side my important documents and software. If the same amount of prayers, kupars and symbols are to be hung literally on your neck; perhaps you may need a car to carry your soonkey. Now, if you question the content of the device being just virtual and nonphysical, you should perhaps reflect on your faith.

So my e-Soonkey is the marriage of faith and technology.

At times I funnily believe that someday e-Soonkey may be more effective than antivirus in protection against computer viruses.

Email ThisBlogThis!Share to TwitterShare to FacebookShare to Pinterest
Yesterday morning I was dressing up when my son screamed out for me, "Dad, Michael Jackson

is dead" I thought, what a silly joke! I found myself running for the TV though. It is hard to accept Michael Jackson is dead at 50. I was his fan long before i heard any of his songs. I became crazy after him later when I actually saw his MTVs. When he was going through his rough times I was always by his side, believing in his innocence and loving him all the same. I watched a movie made on his life where I knew he was indeed Innocent and child-loving, and that people were jealous of his fame and money.
God gave him super talents just to take him back so soon, what difference it would have made to let him live through the London Comeback show this July. What a life he lived? He shall be 50 forever, Peter Pan as he always wished in his Neverland Ranch with children, and most of all with nobody to accuse him anymore.
God is afraid that people love Michael Jackson More than they love Him and therefore He takes him away. RIP
By PaSsu at 12:10 pm

Punatshangchhu: a River to Revolution

Email ThisBlogThis!Share to TwitterShare to FacebookShare to Pinterest
The Pho chhu and the Mo chhu in Punakha combine and form a bigger river called Punatshangchhu; meaning “Punakha River”. The name remains even when it flows through the Wangdue valley.
It was just a river (name of a river actually) the other year but now a life changing revolution. Ever since the hydro electric project began the name “Punatshangchhu” became symbolic to power, money, lavishness, snob, etc.
Besides the bigger national dream of the biggest Hydro power 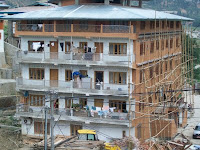 project, we ordinary had our own dreams coming true with the Punatshangchhu: jobs for thousands, schools, hospitals, public service vehicles, business boom, etc. etc. But what happens now? The valley lost its innocence with the project. People are hiring out everything to Punatshangchhu: Building, truck, car, house, hut, land… Thank god Punatshangchhu doesn’t hire eyes; otherwise people are ready.
Ordinary people are losing homes, the landlords no more want tenants, whom they had hard time getting in earlier days. House vacating Notices are sent in like love letters in most household in Wangdue. The denial of the notices result in rent hike far beyond human reasoning; the value of compassion has burnt itself in the desire of huge Punatshangchhu offers. With hardly any building left behind by the Punatshangchhu, Where would the tenants go?
We ordinary cannot find a way out now, we can forgive the road damage and blocks caused by huge Punatshangchhu trucks and machines but we want our homes back. Please don’t buy away our living…
By PaSsu at 10:25 am

Attempt to Burn us Down

Email ThisBlogThis!Share to TwitterShare to FacebookShare to Pinterest
My family rent a cozy apartment in Bajothang, little beyond our income, but where else to go?; Bajo is next Bombay with Punatshangchhu Project coming up. Of late we are spending sleepless nights, not because the rent is soaring but because there were several attempts on burning down the building we live in.
Attempt one; Fire was set underneath our staircase, burning down the electric line and some belongings of tenants stored there. We took it for a careless accident.
Attempt two; There was a pile of wood staked up by the side of our building. June 6 (O it was my birthday and we were out) the woodpile was set on fire. The tenants rushed out to put down the fire before it could catch on to the building.
Attempt three: The same woodpile was set on fire again a week after (13Th June). This time the fire was set close to the building and by the time we were alerted the fire was kissing the window of the third floor. The tenants were always united and we could manage to put down the fire again. But we are now sleepless more than ever. The suspect is at large. This is unlike Bhutan. the innocence of the Bhutanese is lost. There are nine families living in the building who have nothing to do with anybody in the community and if the fire burns down the building we are all gone. Call 113 from Wangdue and see...Punakha police responds and says call Wangdue police, We are helpless and waiting for the next attempt without a peaceful sleep. Funny part of all is that we use lot of water on putting out the fire when Bajothang has water shortage.
By PaSsu at 8:51 pm

Ngawang Inspired me and I inspired him. 2005, we met in Ugyen Dorji High School. He had a draft manuscript and I had mine. We were our first readers. Four years in waiting, I almost forgot my dreams but Ngawang has achieved it. He reminded me my dreams again. He does it often. But I am so happy for him. He knew where to go, Bhutan is not a place for publication. It took a Nepali publisher to fulfill his dreams, and I am still waiting for Bhutanese publishers to complete their high-budget government document printing. How can I totally blame the publishers, they are just being smart, they know Bhutanese people won't buy Bhutanese books. I heard the best-seller sold four hundred copies in four years…

But Ngawang and I write stories because we feel we are made to do that! We don't want money from our writings, we only want readers. Ngawang's book has not yet come to Bhutanese stores but it will soon come and I want Bhutanese to read and appreciate… who made Shakespeare great? The English readers!

Email ThisBlogThis!Share to TwitterShare to FacebookShare to Pinterest
Media across the world go in search of news but in Bhutan News go in search of Media. Last night I was watching BBS reporting on the road damage caused by rain below Bajo Lhakhang; stating how it has affected the villagers. It was not a farm road over a cliff, it was actually a path among the field and there are hundred other ways for the villager. However since our media goes where they are called there is nothing else we could expect. If the Media is little more sensitive just on their way to that road block lies our school, Bajothang school, where the entire sand from valley above flooded our girls hostel. But it was hardly noticed. That night the whole school didn’t sleep keeping the sandy water from getting into the rooms…the picture will tell more. 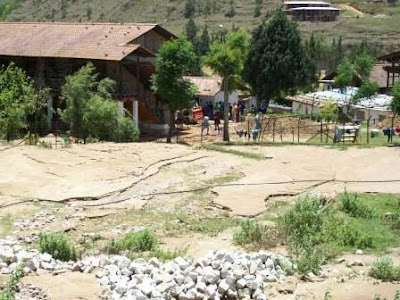 By PaSsu at 8:02 am
Newer Posts Older Posts Home
Subscribe to: Posts (Atom)