Why would they want to “kill” the paper(Bhutan Times) they made!


This very team walking out today has given Bhutan Times its wings. Who could love the paper more than them? Not at least a man who joined just some days ago. It is a big story now. Of all Business Bhutan must find it ironic to see how their entrance has coincided with an almost-exit of BT. Anyway they got a hot news to print on a cold autumn morning.
I waited outside the shop that sells BT to see if there would be an issue last Sunday. I was playing with a strange probability in my mind; if there is the issue this week then it shall be a history, if there isn’t then it shall really be a history.
The opposition leader Tshering Tobgay is more excited than judgmental about the issue in his blog, “Volume III, Issue 50 of the Bhutan Times could hit the newsstands on 25 October 2009. If it does, treasure it. That issue could mean that private media is much more vibrant than we realize. And that fact is worth celebrating, regardless of who is right – journalists or management.”


The second page is full of scanned copies of letters; from employees to the company, from BICMA to company, from CEO to BICMA. The one letter that caught my tail is Wangcha Sangay writing back to BICMA; I (Mr.) Passang Tshering of Haa Yangthang is thoroughly surprised by the degree of confidence and aggression of (Mr.) Sangey of Haa Wangcha. There is no doubt that this senior citizen of 57 (with a track record of proven capabilities and established credentials- look who is saying this) will rescue the company (from what?). However the letter is anything but official. He condemns the move of the team as “shameful” and BICMA’s interference as “threat”. Many lines are as if directly translated from a furious villager’s tongue.
The news is everywhere; criticism is blown in the wind.  Everybody is talking about how bad it was of the seven people to walk out on their company when it needed them so much. They are of the opinion that they left the company because the company is broke. There are plenty of stories from one side and from the other we have just this phrase “editorial interference by management”. What does it mean? What went wrong inside their office that made these seven people give up their jobs? There must be something bigger than a-cup-of-free-tea wrong and nobody is daring enough to speak it up. 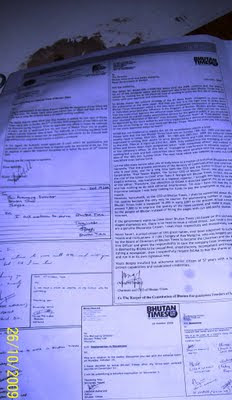 As I read this blog “WE ARE NO WRITERS...” there seems to be a matter connected to that solidarity walk, which gave many oldies the fever of their lives, “It seems like some people have never come to terms with the ‘solidarity walk’. They dig shit. The stink returns. If there is any political reason to it…“ However I am far from understanding anything related to this but my concern is rather than condemning these seven people without even listening to their story, we should urge to know what they really meant by “editorial interference by management”? Thimphu is short of jobs, still why did they have to leave theirs, if not for a big reason? For the good of democracy we the normal citizens demand to know the fact of the matter.
25th October Issue of Bhutan Times must have sold the most, for everybody wanted to know what would be in it. Not so bad as we feared. There are many new names of which “Sangey of Ha Wangcha” out stood all the other, not in the style of writing but in the style of writing the name.
Hope we get to know who is right.
By PaSsu at 12:28 pm