My Daughter tasting the first spoon of food

Email ThisBlogThis!Share to TwitterShare to FacebookShare to Pinterest
Tonight at 9PM my daughter will be 6 months old. And this morning she tasted the first spoon of food in her life. Her mother and grandmother excitedly enjoyed feeding her, I missed the moment. But this afternoon I watched her during her lunch. She got irritated when her mom took forever in preparation; she was screaming and licking her lips as she saw the bowl coming. Surprisingly she cleaned it thoroughly and was ready for more. She has been hungry for last six months. We fought the temptation of feeding her for so long. My mother tells me that I was fed the very day I was born. It’s our achievement that we could hold on so far.
There were a few exceptions we had to give ourselves; we used diaper in the first week, we has to give her pcm often, we put her in the walker when she was five months and we already started carrying her on our backs. There is right time for everything, but the right time depends on whom you are listening to. So often we decided when the right time is. Of course we would have avoided the medications but there was some unfortunate period in my darling’s life; she was ill and suffering from fever and pain in her neck, which is when we couldn’t help. I thank the doctors in Bajo BHU and JDWNRH and most of all my doctor friend on Facebook, Dr. S. Pradhan.
Today, as my daughter becomes half a year old I am happy to have my mother with me. My mother watches her granddaughter speeding around the room in walker and unscrewing whatever gets into her way. She makes different sounds in different moods and won’t leave us bored. She can already recognize her mom, father, brother Jigme and uncle Samten. She will remain silent if someone other than us picks her up, then if she is no released soon she will cry, but to my pleasure she doesn’t mind my mother.
One major question is answered today after she emptied the blow of rice soup, i.e. 6 months is the right time to feed your baby. There were other questions like, when should we start bathing her? When should we start using diaper? When can we wear her pants? When is the right time to use pillow? Can we use pacifier after the second month? When can we put her in the walker? When should we start feeding her? We passed all these questions. Now comes the next section of questions: When can we give her solid food? Is it ok to give her vegetables after seventh month? When can we let her walk on her own? What is the first sentence that we should be teaching her? And My personal best question is, when can I start teaching her English Literature and abstract Art?
By PaSsu at 4:41 pm
4 comments: 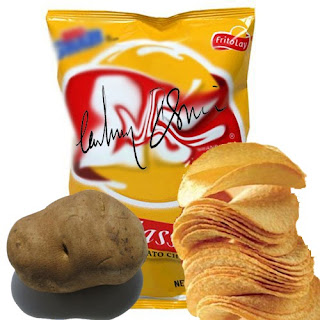 In school there was a popular joke about Bhutanese way of doing business; we sell a kg of potato for Nu.5 to India and same potato will be fried into chips and sold back to us, only this time we pay Nu.5 per potato. But the serious part of this joke is those highland potatoes are second to none.
I remembered this joke from my childhood on seeing one news on BBS. A bold lady has initiated a green program of recycling papers. She is receiving impressive support from government offices and schools in Thimphu. Of course, who would not want to give away their waste? She is spreading happiness by creating employment, taking care of others’ waste, dealing with environment problem and still making money herself. Hope she will receive recognition for role in reducing waste and pollution.
You might wonder why I remembered a joke on such a wonderful act. Well she is not recycling the paper. She is just sending it out. When I saw jute bags full of papers ready for loading, I wondered how much would each bag fetch. Not more than Nu.100 or Nu.200. There in each bag should be enough paper to make 100 Notebooks, and when it comes back to Bhutan after recycling we will be paying them over Nu.5000. Fifty folds! That’s beyond potato and chip story.
Bhutan will never make microchips or jetfighters but history tells us that we were the makers of world’s strongest paper. We have the history but we failed to move forward. We are still making world’s strongest paper but with technology we used 100 years ago and at the same old pace- hope this is not what we call preservation of culture.  Jokes apart, we need not make the machine to make paper, a country can afford to buy one and contribute toward socioeconomic development.
How long are we going to go on doing potato and chips business?
By PaSsu at 9:37 pm
1 comment:

27 Years in Teaching and Divided From Family- My Aunt's Story

Email ThisBlogThis!Share to TwitterShare to FacebookShare to Pinterest
One Saturday, during my regular weekend visit to my aunty at Punakha she showed me a certificate from 1990. It was awarded to her for successful completion of NAPE course then. What is surprising is that the certificate was wrongly addressed and she just got it from her contemporary after 20 years. The paper was neatly kept and looks as fresh as it was delivered this morning, though in these many years my aunty has become grandmother to two granddaughters. Perhaps now you can guess how many years she served as teacher.
She is new in Punakha and houses in Kuruthang are not at all welcoming. She has lost some weight over the week climbing to the tiny room beneath the roof. We scanned the whole town with all the relatives we have around in search of a decent house, and this is what we had to agree with; a three unit attic with lights coming in only through the transparent roof. The new place and the tiny house have stolen away my aunt’s soul. She looked defeated and depressed, and that’s why I always find time to give her company with my family.
Twenty five years ago, or ten years ago if she was posted to Punakha it would have been very usual and she would have taken it with joy. At this age when joints start paining it is hard for her to believe that she has to move out of Thimphu on compulsory transfer. It is a policy well thought over by the ministry when it comes to making it fair for the system but what about the humane side?
Many of her mates are directors and secretaries, a few are even ministers now, sad but true some have passed away but she is still living and teaching. Recently she tells me that even her students are there among directors and secretaries, sadly they won't remember her because she taught them in PP. Young teachers have new system in place whereby there is a strong career ladder. If it was there during her time by now she would be reigning somewhere on the top. But since 1985 she has only grown horizontally. She has no complains. She knew her service is delivered and therefore would be acknowledged. Not in her wildest dream did she see herself being punished for 25 years of service.
Her children suggested her to resign and take rest because she has already shown sign of wearing of her lung and vocal cord from quarter century of shouting with little children. Money has never been their problem and will not be, now that uncle earns triple his old salary with the new job and their daughter is in job. It is about dedication to work. With her degree of perseverance and experience I would be expecting a medal of honor from the ministry and not punishment.
Why am I calling it a punishment? My aunty and uncle are all by themselves far from the crowd of Thimphu. They planned the cottage on their own to spend their old age. Uncle is in late fifties and worse he is a bad cook. Tears welled in my eyes when he started learning how to cook last winter after aunt’s transfer was confirmed. Their three children are away on job and studies. Uncle may be used to staying alone from his lifelong experience in arm force but not hungry. If he falls sick there is nobody around to offer him a cup of water.
On the other side of Dochula my aunty, who has always lived in crowd of children, has to sleep with TV still on, she is a good cook but with her husband surviving on Maggie she can hardly enjoy a meal. She is overweight and very much vulnerable to sudden illness. But if she wishes to lose weight now, her wish is granted already. I have never been old so far, therefore I don’t know how true it is when old people say they feel lonely. If it is true I feel sorry for them that the system has made it worse.
Writer’s Note: With this article I don’t mean to question the policy because I know any policy is bound to hurt some people. It must look at the majority, for even God himself couldn’t create something that could please everybody. I only wrote it in sympathy and love for my aunty.
By PaSsu at 7:44 pm
5 comments:

Email ThisBlogThis!Share to TwitterShare to FacebookShare to Pinterest
Recently we have started a Facebook group following our idea of building the Writers Association of Bhutan. Good responds we received inspired us to begin a blog. With this two we are in search of people who love writing, who can inspire us with their passion and who can lead us through our dream of having a formal association.

The blog has just begun and we have five writers so far, we are looking for interested writers to come forward and be our part. It's a long dream and just daring is enough right now.

I wanted to share my dream of WAB with my readers here, but I have it already posted on the WAB blog and therefore I urge you to go there once and see if you can help us.

Well I am still waiting for my writers to break the ground but looks like they are all looking for something substantial to start with, probably they think this is not for their casual writings. But I must clarify that this is indeed the place for anything and everything you have on your mind. Until you decided what to write let me give my piece of mind about the association.

I know it will take time but I am just happy that it has begun. When we first discussed the Idea of the association the first thing that came to my mind was promotion of writers and assisting them with their publication. Where will the money come from? We will figure that out, which is why we are grouping. Writing is one thing and struggling to get it publish is another which puts an end to the first one. Many of us might have been victims ourselves. ...

Read the rest on http://writersassociationofbhutan.blogspot.com/
By PaSsu at 10:39 am
1 comment:
Email ThisBlogThis!Share to TwitterShare to FacebookShare to Pinterest
By PaSsu at 10:29 am
No comments:
Newer Posts Older Posts Home
Subscribe to: Posts (Atom)