Email ThisBlogThis!Share to TwitterShare to FacebookShare to Pinterest
Wangay is a teacher in Phuntshothang Middle Secondary School, Samdrup Jongkhar. I don't know him but his letter (see the picture) published in Bhutan Observer yesterday connected to me. He had to come to school to attend to his duty leaving behind his grieving wife whose mother passed away. In times of sickness and death even enemies join in to give helping hand but because he was a working man who ran out of allotted leave, he failed so much as a husband. 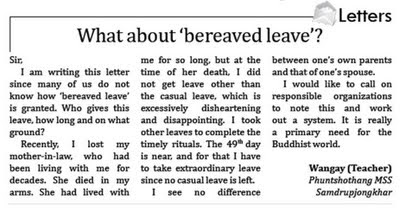 When I was in my first year of college my father passed away. My sister was one year senior to me in the same college. Two of us cried our long journey home. I cried more when I thought of how my mother would be, and cried even more thinking about our three younger siblings. Our youngest sister was only three then. When I reached home I rushed to see my mother, why has already cried herself to unconsciousness. My little sister was among the villagers trying to revive my mother, she wouldn't know what had happened. She would say her father has gone to collect firewood. My youngest brother was on his way back from school and hadn't yet known his father was dead. My other younger brother was strongly waiting for us, since he was the eldest when we were not there.
All our close relatives living in Thimphu provided us with all the money we need to preform the funeral rites, but when it comes to being by my mother's side they weren't there for even a single night. We children were the only people surrounding the widow. And the most ugliest, most regretful and the most inhumane part of that story was our early return to college. The two eldest children left their mother on the seventh day because of our unforgiving attendance system in college. If we didn't have the required attendance we wouldn't be allowed to sit for exams no matter what. Even today, it pains me so much when I think of that system, and my biggest regret is the choice I made- I chose too leave my broken mother for a damn college.
This is my story among thousands of your stories. Of all the times in life shouldn't we be given a special leave  when something like these happen? These are life changing moment that don't happen often. And with Wangay, I wish to urge the government to think over it. It's should matter if it isn't in American system, Bhutan is the first country that should welcome "bereaved leave". Please.