Email ThisBlogThis!Share to TwitterShare to FacebookShare to Pinterest
(Good people in my life-II)

“Does your stepfather treat you well?”
“You should hit him on the head when he is asleep.”
“Why don’t you go and live with your ani?”

Some people in my village diligently let me know that the man in my family was not my father, and that he would treat me bad. I was only over three years old to understand anything but they made me into a suspicious little boy. It was their usual rustic way of having fun; teaching me all the tricks to challenge my stepfather.
I would happily report to them, “He is scared of me.” Because my stepfather wouldn’t hurt a fly I really thought he was rather scared of me. I wish they had taught something good, or just nothing at all, so I would have thought he was my father or at least as someone who wouldn’t hurt me. I regret having never called him apa. I didn’t even call him aku. I would call him by his name until I was much older.

His real name was Phub Tshewang, which only our grandmother fancied, rest called him Aatsho. A serious infection in his childhood had left him limping. He was a natural introvert who mostly had nothing to say. But he had another dimension to him through which he was capable of expressing himself; he was a man of many skills. 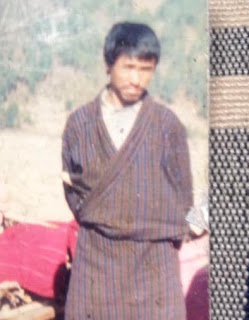 He was homeschooled by his tyrant father who taught him religious scriptures, tailoring, carpentry, and the art of making torma. This set of skills made him one of the most sort-after persons in the village. Perhaps he must have been the only person in the village with such versatility, a man who was useful across all seasons.

Though his earnings kept us well fed in the village, we have had difficult times meeting my school expenses when I grew up enough to need a pair of leather shoes and sports shoes simultaneously. In village we all wore those greenish Chinese canvas shoes, which came for Nu.120, but he understood I couldn’t take those to school. One evening he returned from the town with a pair of sport shoes for me worth Nu.700. It broke my heart, because that was a lot of money in the village and I knew how hard he toiled to save so much, but those were the moment that helped me become a responsible youth. I gingerly wore the shoes for many years.

When I reached high school he started communicated with me more, more than to anybody in his entire life. One evening when he didn’t return from woods, we were so worried at home. We had even planned to go searching for him if only we knew which direction he went to because he wouldn’t tell anyone. He didn’t need company. After dark when he finally returned appearing so casual and took his place near the fire, my mother shouted at him for not informing us about the late arrival. He gave a few words explanation. After she went to bed he quietly called me and showed me his leg. He was in extreme pain. His axe slipped of a log and hit his already limping leg and left a deep gaping wound. He lost much blood. Though freaked out, I carefully nursed his wound and put him to bed. He told to keep it between us. Since then there were lots of things that were kept between just the two of us.

When I had my first girlfriend I showed him her picture and told him everything about her but he laughed at the picture and told me she looked like a sick horse because she was thin and fair. He rather had another girl on his mind for me, a huge wrestler like girl in the neighbourhood. I laughed at his choice too. We were gradually beginning to understand each other.

But he never let me or my brothers touch his tools. He didn’t pass down any of his arts to us. He never wanted us to learn his arts and live his life. He always told us that life would be easier if we rather went to school and used books as our tools. All three sons in the family grew without any of his skills, but his bigger plan worked. We all completed our schooling.

When I was in college first year he came to meet me with some stuff my mother had sent. He had sent a boy to call me behind the college building, thinking I would be embarrassed if he came limping in front of my friends. His shyness and being a loner must have been because of his disability. But I couldn’t be bothered; I took him around and show him my college. I saw pride beaming in his eyes as he scanned the Dzong-like structure of my college.

One of the first things I was going to do after I began earning was to take my stepfather for treatment and give him the comfort of walking without having to limp and wear any kind of shoes. But just one year short of my graduation he passed away. He must have suffered for a long time but he never disclosed it to my mother, if only I was around he would have told me and I would have taken him to hospital on time. He rather went to his mother’s place and died peacefully. More than ten years have passed since but I still couldn’t fully overcome his death. I live the regrets that he never truly knew how I felt about him, I had only begun to open up with him and he left.

Some good people never cease to love you and guide you, not even after their death.
By PaSsu at 2:02 pm