Ending 2015 with a Bhutanese Audiobook

Every year on this day and about this time of the day I open my blog and recount the year when the rest of the world go to party. I would take great pride in the number of articles I have written and but this year I can't do that because I have underperformed. Somewhere among great people I lost my confidence to write in my own style because they wanted me to write like scholars. I failed. I need to get back soon.

I will always remember 2015 as the year I solved Rubik's Cube. Over the months I have bettered my time and now I can do it in less than two minutes. It's only matter of time before I master it but I have gift my cube to my nephew who has already beaten my record.

The other things I would like to remember from 2015 are Yangthang READ Centre, which READ Bhutan opened in my village in the spring. This I am sure will change the quality of life in my village and therefore the future of it. To sustain the activities of the centre and engage our youth meaningfully I have founded Yangthang Village Youth Club. This club will compliment and give wings to the facilities in the centre.

My dream to see clean toilets in Bhutan was shared by a group of very close friends and we made a big beginning this year with Bhutan Toilet Organization's Nation wide campaign that involved over 300 volunteers from across the country. We have set up our office with support from many people and now we are ready for more than just cleaning.

And finally before the year ended I had one last thing to take care of which began in 2014, the production of an audiobook. With permission from author Kunzang Choden I and my 12 year old student Sonam Chuki began recording the novel Dawa-The Story of a Stray Dog in Bhutan last year. M-Studio did four days of recording with the little girl and took months to put together the three hours audiobook. iBest Institute took from there and helped in producing 50 CD. From the author to the recording studio to the CD producer and the cover designer Che Dorji, none of them bothered about a penny, it was all labour of love. 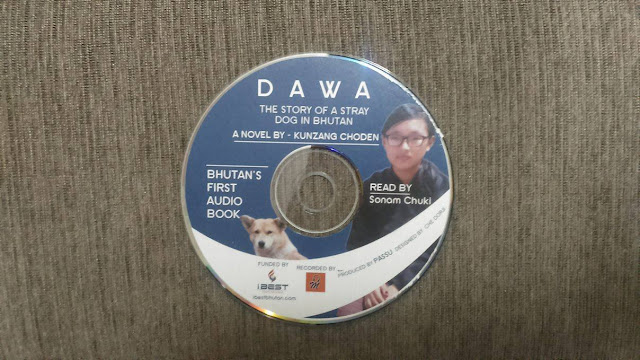 It was launched last week at Camp RUF during Karma Choden's reading session, and later the book was played every night as bedtime story. While this first Bhutanese audiobook could be a great educational material for all students and especially the ninth graders who have the novel in their syllabus I saw that it's a priceless gift to the visually impaired students. Therefore I have asked Sonam Chuki to send a copy to Khaling Munseling School as gift from her side among other schools.

I am yet to present a copy to author herself. We are meeting in January and I will let her listen to Sonam Chuki reading her book. If she finds it worth I am going to gift the recording to her.