I was invited on a Facebook Live show with Gup Phub Tshering to talk about my journey so far; and the significant highlights like the name 'Chablob', PaSsu Diary Blog, then the book, founding of Bhutan Toilet Org, About children and social media- Ninzi Show, Google Maps and Local Guide, about BOOKNESE and many other things. 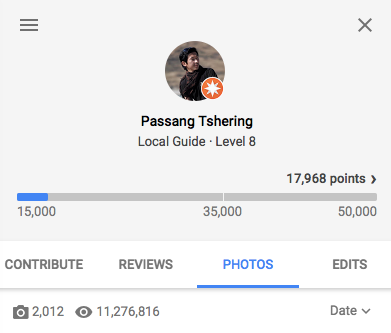 It went on for almost three hours. Who does a talk show for that long! Have we just done the longest talk show ever? But our viewers were kind to us, they stayed with us and told us to go on and on. Here is it, for the record. And for those of you who have missed it.

Drawing my Family Tree During the Lockdown

One of the few satisfying things I have done during the last lockdown was working on my family tree. It was one project my cousin and I planned to do a few years ago but we neither had the time nor the expertise to get that done. The very thought of putting together the details of so many people on a sheet of paper overwhelmed me.

It may sound petty but I was wondering how many A4 papers I would have to stitch together until I could get all the names up. I was even considering a wall to stick all the names. But deep down I had a strong feeling that there should be some software to create a family tree. It seemed like a big task and we pushed it aside.

One day, my Asha sent me a black and white picture and said the man in the picture was my great-grandfather. He suggested that we traced our bloodline as far back as possible. This was the second time someone in my family proposed to draw our family tree. This time the black and white picture was truly inspiring. I began looking for software and landed an online site called Family Echo, which was free, powerful and easy to use.

I began working on what seemed like a massive project, but within a few days, I had run out of people. Family Echo helped me organize everything in one small window and make all the complex mapping as I move from one generation to another. The exercise gave opportunities to call older member in the family and dig deeper into their memories. Some of them we so touched that we were doing it and that we reached out to them.

As the family tree grew bigger I had the option to invite people in the list to contribute to expanding the tree. This has connected and reconnected many of my cousins. It has helped solve a few confusions I had and gave me lots of surprised when it comes to discovering how I was related to a lot of people I grew up with without knowing that we were from the same bloodline.

I have traced 167 people across 8 generations of my family, five backwards and two downward after me. Before this exercise I could not even name my grandmothers, now I at least know the name of my great-great-great-grandfather. His name was Dumcho Tandi. And the man in the black and white picture was Babu Dorji Tshering, my great-grandfather. It's quite an irony that there was a camera in his time, and there is not a picture from my childhood.

Dawa Tshering heard of stroke for the first time when his 32 years young wife Rinchen Pelmo collapsed on the ground and was rushed to the hospital in June 2019. He knew she had issues with her blood pressure but he has never known the fatality of it until it struck. It caught him completely off guard. Rinchen was on life support in the ICU. Doctors didn't give him any false hope. They told him on the face to be prepared for the worst.

His ignorance of stroke helped him shield against the harshness of reality. He didn't give up. His wife was in deep sleep for over a week. He has done rituals of every kind. He went to every influential friend he had around to get a referral to India. But he was told that there was no use taking her out. Gradually he began to realize how bad it was. He was told by everyone who knew the disease that she will not wake up.

He went to a researcher friend seeking any information he could gather on stroke in Bhutan. He was given a handful, mostly articles and social media post by some Dr Tashi Tenzin. He managed to get connected to the doctor. Over the phone, he asked in desperation, "Doctor, tell me more about stroke."

Dr Tashi invited him over after hearing how earnestly he wanted to know more. He said, "You are the first person to have ever asked. Come over, let's have a chat."

By the third week, he managed to get his wife to blink her eyes in response when we ask her questions. On the 23rd day, he surprised everyone when he took her home and began the long ordeal of nursing her. Within the next few months, he left his job with Tarayana Foundation and dedicated fulltime on her. He was given the option to take a long leave if he wished but he opted to resign because he needed his provident fund to treat his wife.

He regrettably recollects that despite free healthcare in Bhutan, he emptied his pocket on his wife's treatment; not on surgeries or medicines but on rituals. He went to every odd place any fool recommended and conducted every damn rimdro that came out. He shared that he could have treated her faster had he not desperately wasted his time and money on strange rituals. He declared that it was physiotherapy that put her back on her feet, which was absolutely free of cost.

He would strap her to the car seat and drive her around knowing she would be so sick of staring at the ceiling all day long. He would carry her on his back like a child and go to all the places they would have gone if she were fine. He said going out helped both him and his wife.

In less than a year, he succeeded in getting his wife, whom doctors feared won't wake up, out of her bed and make her walk on her own. She is still struggling to relearn everything, starting with speaking and eating. Knowing her love for farming, Dawa has helped setup her mushroom farm and vegetable garden. This has helped her wake up every morning with excitement and looking forward to the day.

Looking back at the experience he lived since his wife fell ill and watching her relearning how to do things, he felt that if he knew as much about the stroke he could have done anything to prevent that in his wife. His success at getting his wife walk on her feet is another experience, and now dealing with her disability and keeping her meaningfully occupied are things that he wanted to share with others. Having faced with so much at the prime age, Dawa says that the true battle was fought on two fronts; one with the illness and other with depression, and he hopes to be able to create much-needed awareness among the stroke patients and their families.

Dr Tashi Tenzin with whom he had kept in constant touch shared with him how important it was for him to create a formal forum to share such stories to create awareness. As a doctor, he had said that he would love to do it but his hands are full within the four walls of the hospital. The doctor wanted Dawa to be the one to go beyond the hospital to reach out to the people. Thus, Bhutan Stroke Foundation was established.

Personally for myself, having run to Bajo hospital carrying my mother inlaw in my arms and watch her dies a few days later in Thimphu hospital, and having watched the doctors pull the plug on my brother-in-law who was declared braindead, I have always felt the need for a stroke care organization. An organization that will create awareness to prevent stroke (before), help build efforts in timely treatment toward recovery (during) and create means for the patients to cope with life after stroke through meaningful engagements (after).

When I met Dawa Tshering in Punakha, introducing his Foundation during the CSO retreat I felt like my prayers were being answered. As he spoke about his wife I couldn't see him well through my teary eyes, I knew he was destined to do this. Having hit the hardest, he has the motivation and determination to take this forward like no other. He says he wants to strive for stroke-free Bhutan, where no one has to suffer like his wife, like him and like his two children.

Every day, JDWNR Hospital alone is said to receives 2-3 stroke cases. Globally 17 million cases are reported annually, out of which 6 million dies and 5 million are left with a disability.