Email ThisBlogThis!Share to TwitterShare to FacebookShare to Pinterest
I have only few fragmented memories from my early childhood. It’s said that you remember those moments for certain reasons, buried deep within our subconscious mind. One such memory is of my friend Pempu. He was the first best friend I had in my life. We went to Gyensa Pry School together in 1988. I was 5 and he must have been a few years older.
A senior from our village, Achu Rinzi, locked us inside an abandoned BHU during our exams and we had to repeat PP together. From the next year we refused to be kidnapped during our exams and I did well in exams year after year but Pumpu repeated PP several times and realised school was not for him. We went on to help his father who was a rich nopoen (Yak header of Dasho Lampon). That’s how our journey parted.

During my Young Professional Leadership Program (YPLP) at RIGSS, Dr. Adrian Chan gave us a seemingly simple exercise to draw a Personal Event Timeline. It was to dig deep into our memories and record those event that had some sort of lasting impact. He believed that an unexamined life is not worth living.

In deep silence we were to travel back in time and note down those impactful events from our life:
Wow, it was intense. I never thought it would be so emotional to evaluate something that has become a part of the past a long time ago. There were some seven events that made me slow down and take notes on my swift walk down the memory lane. I hope to blog about them all gradually.

The very first memory was of Pempu. I saw myself waiting for Pempu to come out and play with me after we returned from school. My mother was not home so I was still in my school uniform. He did not come out. I made our usual code sounds but he showed no sign of coming out.

I was lonely and upset, and thinking of ways to take revenge on him. I still don’t know why I didn’t just go in and played with him in his house. The next moment I saw myself climbing on the stonewall of his kitchen garden to get his attention. That was when I stepped on a loose rock and the stonewall came crumbling down with me. My big toenail was gone and it was bleeding badly. I cried as loudly as anyone could hear but no one heard me. I limped my way home and fell asleep at foot of the ladder.

“Lama kheno, look what’s happen to my son.” My mother's loud cry woke me up and I began to cry again. She asked what happen and before I knew I had said, “Pempu did this to me.”
My exhausted mother, who has just returned from the field carried me on her back and stormed towards Pempu’s house.

“Chimi Gyamuuuu..... Kaka Tsheriiiiii... come out and see what your son has done to my child.” My mother screamed from outside Pempu’s house. The whole village would have heard it. 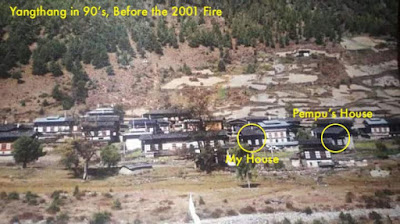 The whole of Pempu’s family looked out of their window, shocked. “Pempu didn’t even go out after he reached home.” Aum Chimi, his mother, shouted back as a matter of fact but my mother was so furious and went on cursing them. They defended Pempu for sometime and after a while they were convinced that he must have sneaked out without their knowledge. I could see him being dragged away from the window by his father, who is known for his bad temper. Then I heard my revenge, some thud sounds and his deep bear like cry.

I could almost see the look of evil on my face as I recollect that event. I was five. How did I even do it! We must have made it up the next day despite our parents warning us not to be friends anymore. And over the years I thought the event had faded out but during the exercise, in deep silence, the event played in front of my eyes like it happened yesterday, and more dramatically I could see myself in third person.

That’s when I realised that guilt from 1988 has lived with me for all these years, because otherwise why would I remember it so vividly when I can’t remember any other thing from the 80’s. I think, perhaps that event must have shaped me into an honest person that I am now- considering the burden of guilt I had to carry to this day.

And yes, this has helped me become a smart teacher and parent who adores children for their cuteness and innocence but won’t rule out their capability to lie and manipulate truth.


I owe Pempu an apology but I think he won’t even remember, it’s me with whom I have to make peace.
By PaSsu at 1:43 am