When Tharchen told me that he was going to make an animation movie I didn’t know how to respond. It sounded exciting but very impractical. All he had was a bunch of high school graduates, whom he was mandated to train and give employment. It was a suicidal mission. But who was I to tell him, especially so when he was so determined to the extent that he was talking as if he saw the end.

Deep down, I knew he would come to his senses and give up on the idea of building a sand castle in the cold Himalayan air. He was just done building a company, iBEST Institute, that was doing so well, and by all means he deserved to enjoy his success for good few years before he took a shot in the dark, that could topple his company. Just some years ago, which he seemed to have forgotten, he went to start a dairy farm in Dagana, which should have taught him some good lessons.

Despite my subtle disapproval he went on. Art classes for 25 young trainees began in earnest. Some months later, Tharchen was beaming with pride when he invited me to an exhibition of artworks done by his trainees. I was least impressed. I saw no possibility that those hand could be used for producing artworks good enough for an animation movie. But you should have seen the look on the face of the man, he was so sure and ever more convinced.

His business partner, Sonam Rinchen who should be worried and cautioning him about taking such uncalculated risk was rather the cheerleader of this idea. Oh, perhaps this explains how they found each other in the first place.

The furthest I could see them go with the project was producing a namesake animation movie that’s barely watchable and everyone saying, “It’s ok for a made-in-Bhutan animation, after all we don’t have the skills and technology, blah blah…” I remember telling Tharchen that at this age and time, when world is so connected in real time, we cannot just complacently use brand Bhutan as a sad excuse for producing a pathetic result. We must rather understand that the Bhutanese audience has seen the best of animations from across the world and it won’t be easy to impress them anymore.

The training was still going on in one room and in another room, I was seated with the script writer, translator, and other consultants to review the script. I could not believe it was really happening. The story was not only decided but even the script was drafted. It was based on the ballad of Pemi Tshewang Tashi. I was still wondering if Tharchen was serious about his trainees doing it. But he surprised me further by unfolding his project timeline where the date of launch of the movie was set.

On the floor above where we were, iBEST Studios, where the movie will be made, was being set up at the cost of at least two million Ngultrums. On my way out of the review room, I peeked into the training room and pitifully prayed for the trainees, who have no idea what they had signed up for.

After a year since it began, the training ended and certificates were awarded. With any other training course, that would have been the end. The trainees would proudly leave with the certificate, regardless of what they had learnt. But this, like I said, was an interesting case, where a real project was awaiting them already. It was a test both for the iBEST Institute and the trainees.

While the long preproduction was taking its painful course the newly certified animators tried their hands on several small projects. I didn’t know how long they took or how painful it had been but they were able to produce about a dozen tiny pieces of animations. However, they were nowhere close to what it would take to make an animation movie. Tharchen could still make a U-turn at this point. He didn’t. Sonam Rinchen continued to stand behind him.

The next time we met, Tharchen presented the storyboard. By then he had diligently gone sniffing after everyone in Thimphu who carried the slightest scent of animation-related skill on them and finally it had dawned on him that all he had with him on this mission was his pack of 25 underdogs. There was hardly anyone out there who was ready to commit to such a huge project and the discipline it would require.

At least he managed to pull in portion of commitment from some people who are critical for the project. His used his mastery over the human resource management to delegate responsibilities and streamline the process and let the ball rolling. Six months into the project, seven people backed off. On the home front his marriage was failing. He was the last person to realize that all was not well behind his back. It snapped when he had the least energy to deal with it. It was becoming increasingly painful for me to visit him because each time there was a lot that had happened, much of that being unpleasant. But to his credit, his focus on the project was completely undistracted. He would show me fragments of impressive works and make me watch over and over.

By the time the project was due to end, I visited him to share his joy but it turned out to be the worst time for celebration. They had put together everything and saw that it was nothing like they had envisioned. It was indeed a sorry excuse of an animation movies that he didn’t even care to show me. For the first time in all times, I saw the man beaten. He declared that it was not happening. He spent so many sleepless nights for a dream, which just crumbled on his feet. It was one damn expensive blunder and unceremonious end to his ambitious project.

I learnt later that he gave a heartbroken farewell-like speech, shutdown his computer and went home to sleep. He surely needed a good rest but not with such burden on his mind.

The orphaned team realized what hit them. They went to wake their leader and promised him that they would complete what they had set out to do. He shut them out hopelessly and went on with his self-imposed isolation.

And perhaps that was exactly what he needed, because it was during this quiet moments with himself, he later shared, that he could assess the whole scheme of things. It was then he realized that it was not just his project and his dream that crumbled; it was his responsibility to his business partner and his team of young people who marched after him with the hope beyond this one project. The whole future ahead of them. It was their dreams too, and he was the captain of the sunken ship.

It was in these moments that he had the shrewdness to look back objectively on those few fragments of animation that were promisingly smooth. Then the whole arena of possibility became apparent to him. He went back to office the next day and began rebuilding the whole structure of hopes and dreams.

He took the direct responsibility of the all three departments that were there, which worked independently but must be in sync with each other. He removed any cloudy layer in-between him and his three teams. They agreed to work till dinner time with dinner provided in the canteen next to their office. The team unity grew gradually and began to feel like one strong beam of energy concentrated on the new-found purpose. The office literally became their home. They were motivated to stay little longer each night and soon they brought their sleeping bags and blankets to office. There found more purpose in staying after the dinner to work few more hours than going home to waste their time on TV. In the morning hours, I have seen them sleeping like logs on and under their office tables or running around with their toothbrushes looking for water.

Tharchen himself hadn’t seen his bed at home for months at end. In fact, he must be the only one among the team who slept with his shoes on, I saw it myself. Sleeping in the office was not the important part, it was the long waking hours that they made best use of which made all the difference.

I thought they were picking up from where they had left and trying to complete the project on the deadline but it turned out that they were starting all over again, and this time it was all so different. I knew it was at a new level when they released the first song from the movie. Before I could truly comprehend the extent at which they have grown in last few months, they released the second song. They were on fire.

I didn’t visit them much during this period because I didn’t want them to waste any minute of their time but I did pay them visits every time Tharchen summoned. He was specific about when I should come or whom should I come with, it’s often my daughter who accompanied me because he wanted our diverse views on parts of their work. During these occasional visits, I have seen some kind of a renaissance at iBEST Studios, strong energy overflowing at every desk, no one looked sleep-deprived or exhausted. They were seeking more dopamine from their work.

On one casual visit, my family got the opportunity to watch the voice artists recording for the characters. Over 50 voice artists are chosen from Bhutanese radio and film industry for 40 different types of voices they needed. I wondered why they needed people from movies when it’s not even about acting on camera but Tharchen told me that he wanted the best. Interestingly, my daughter was asked to try out recording for Lhaden Zam, Pemi Tshewang Tashi’s daughter because the voice they recorded earlier sounded little matured for the little girl character. My girl pulled off quite well and thus became part of the project.
When the trailer came out I couldn’t believe that the team who started their training from basic art classes had come so magnificently far. In the words of His Majesty the King, “It’s not about if you can or cannot do, it’s about if you will or will not do.” They have done it.

Now that the movie is in the cinema, it’s out there for everyone to see how much our youths can do, which takes more than just some training opportunity but a tharchenian push. It’s an animation that’s so far, the best ever produced in our country, perhaps the longest and comparable to its cousins across the world. They went for nothing less than excellence.

Over Nu. 15 million was invested in this project, which was enough to produce at least five regular movies and Tharchen knows that he will never recover this amount at the Bhutanese box office. He admits that half the investment went in the mistakes they made, the expensive mistakes that eventually pushed them to the level they never thought they could possibly attain. He believes that the best returns from the investment was the empowerment of his youthful team that has now become an asset to our country and to themselves. It’s so intangible, he told me, but that’s what gives him peaceful sleep. 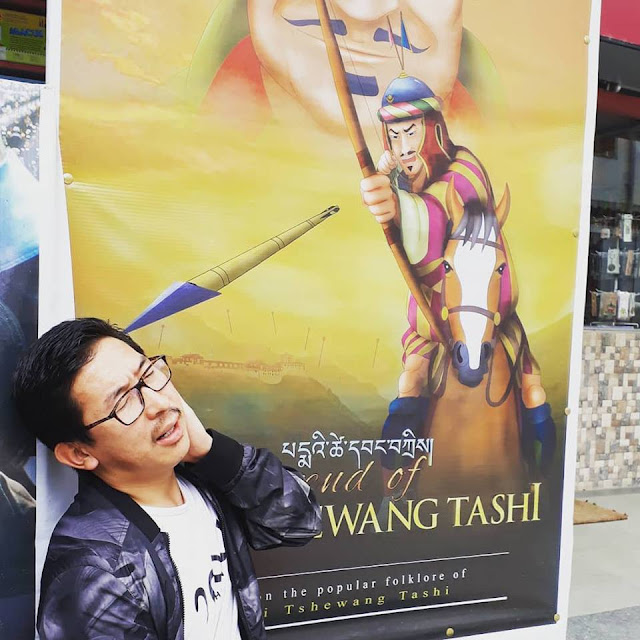