Bedside Toilet Borrowing program was created at Bhutan Toilet Org in 2017, almost accidentally. We had four units of portable potty, which were bought to be used as guest toilets during Highland Festival in Laya, but after realising that the potties wouldn’t be suitable for huge public events we kept them in the office corner for quite sometime. 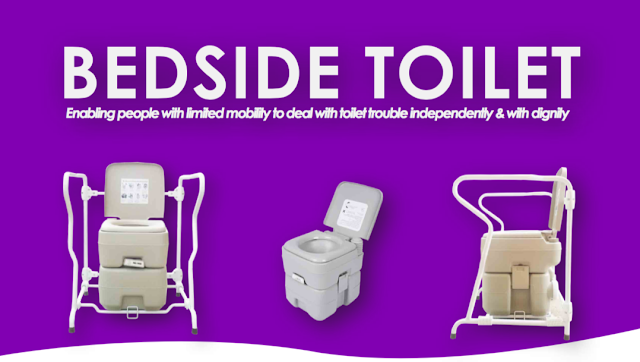 One day, I got a call from Aue Kuenga Tenzin Supe asking me if I could help his dying friend deal with his toilet trouble. His friend was fighting lung cancer and didn’t have the strength to cover the distance between his bed and the toilet. That’s when we discovered where our potty could be used. We sent him a set immediately. His friend called to thank me after receiving the toilet, and I could hear him gasping for air as he struggled between his words. He told me how the toilet next to his bed had solved his nightmare. We felt so sorry to hear about his death after some months but we took solace in the fact that we were able to comfort him in his last days.

From then on we began promoting the potty as “Bedside Toilet” for people who are bedridden due to sickness, disability and old age. We let people borrow the toilets for free, only to be returned when the patient recovers or,god-forbid, dies. On January 30 2017, we put it up on our Facebook Page and by mid day the remaining three sets were taken. We continued receiving calls in the following days, which opened out eyes to one of the gravest problems that is hidden in the corners of many homes.

We learned the desperation of the family members who had to deal with bedridden people at home, some for as long as ten years. They shared how dealing with toilet troubles causes all the awkwardness and resentment over a period of time, especially when daughter is the caregiver of a father, a son for mother. Besides the health hazards due to poor hygiene the most painful part is losing dignity and self respect as one become incapable of managing their own toilet routine, and people around show signs of disgust at you.

Our initiative was to empower them to manage their own toilet by taking toilet right next to their bed, so that even in the worst case at least it can be handled with little assistance from the caregiver. The toilet set has its own flush system and an airtight waste tank that can serve for a week without having to empty. It’s completely odourless one it’s flushed and the valve is closed.

With assistance from some well-wishers, ShaMa Foundation, Pema Seldon and Dasho Sangay R Dorji, we brought five more units in the following months, but like the first batch they were taken almost immediately. We then started compiling list of requests we received. The numbers were overwhelming and we were helpless. So we submitted project proposals to few organisations, who unfortunately rejected it.
Just when we thought we reached a dead end, we received a surprise gift of 10 units of bedside toilets from none other than His Majesty the King. I still wonder how His Majesty sensed our desperation though we haven’t indicated it anywhere. The royal support doubled our program capability overnight and we gladly called everyone on our list. Lives of ten families were bettered thus.

But the list only grew. We have 20 units in circulation that has served over 25 families already. And with growing awareness on the service, we are getting calls each day. Our waiting-list has over 30 people in age range of 23 to 103, and some families are checking in every day to ask if the new batch has come.

I have personally requested three businesses to import bedside toilets from Bangkok and make it available in their shops. I gave them the address in Bangkok. Because their are families who can afford and they want to buy, but it’s not available in Bhutan yet. This too is yet to happen.

With our project proposal reject we began writing to cooperate offices and individuals in Thimphu to sponsor but so far only few offices agreed to help. It’s sad that we receive request calls from very offices that have rejected our request to help. It’s a paradox. With growing numbers of calls from children of aged parents I can see that we are all going to need Bedside Toilet someday. It’s time we invest in it now, so that it’s there when we need it ourselves.

We owe it to OGZ for helping us in transporting the toilets from Bangkok from the beginning of the program and Mr. Kinley in Bhutan Embassy in Bangkok for helping us from there.

Now, we charge Nu.300 per month to ensure swift return of the toilets when they are not used anymore. Of course, we don’t charge that fee if the family can’t afford. 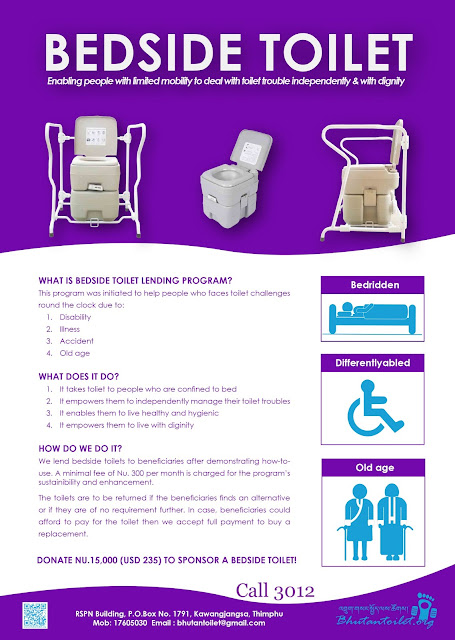 Please call 3012 to donate to this cause, to inquire about this service or the product.  If you want to buy yourself from Bangkok, here is the link and number of Handy Toilet 0990593956

In partnership with ShaMa Foundation we are fundraising on GoFundMe. You can be a part of this by donating at least $5.