Email ThisBlogThis!Share to TwitterShare to FacebookShare to Pinterest
This Teacher's Day in Bajothang was more than a cut-cake and some happy-teacher's-day dances. It will be remembered for ages, there will be thousand trees telling the story of May 2, 2014, literally. Every student and teacher in my school planted at least a tree each around the town.


Planting trees is not an interesting story to tell, and some could even think we got confused about the dates. It's supposed to be June 2. Well there is a difference, June is not as good as May for new saplings to grow. When we plant in May we mean to see them survive.
And Green Zone in Bajothang town remained on paper for very long. The town has so many urgent issues to take care of before they could have the luxury to think of the green zone they once planned with pride. Thanks to the Environmental Wing of PHPA-II that is led by my friend Sangay Dorji. Last year he proposed the idea of plantation and I took the matter to my school. We agreed to do a massive community service and here we are. We formed a core team who put the idea together and made everything possible. Thanks to Vice Principal Melam and Ugyen Tshering for making it happen.
The trees are named and their survival is put up for a competition, therefore we expect this plantation to be different from other mass plantations, we want every sapling to grow into tree. The best classes will be awarded prizes at the end of the year. One parent came looking for his child's plant so that he could nurture it when she is gone to school, but only one parent. I would request more parents to own this idea. 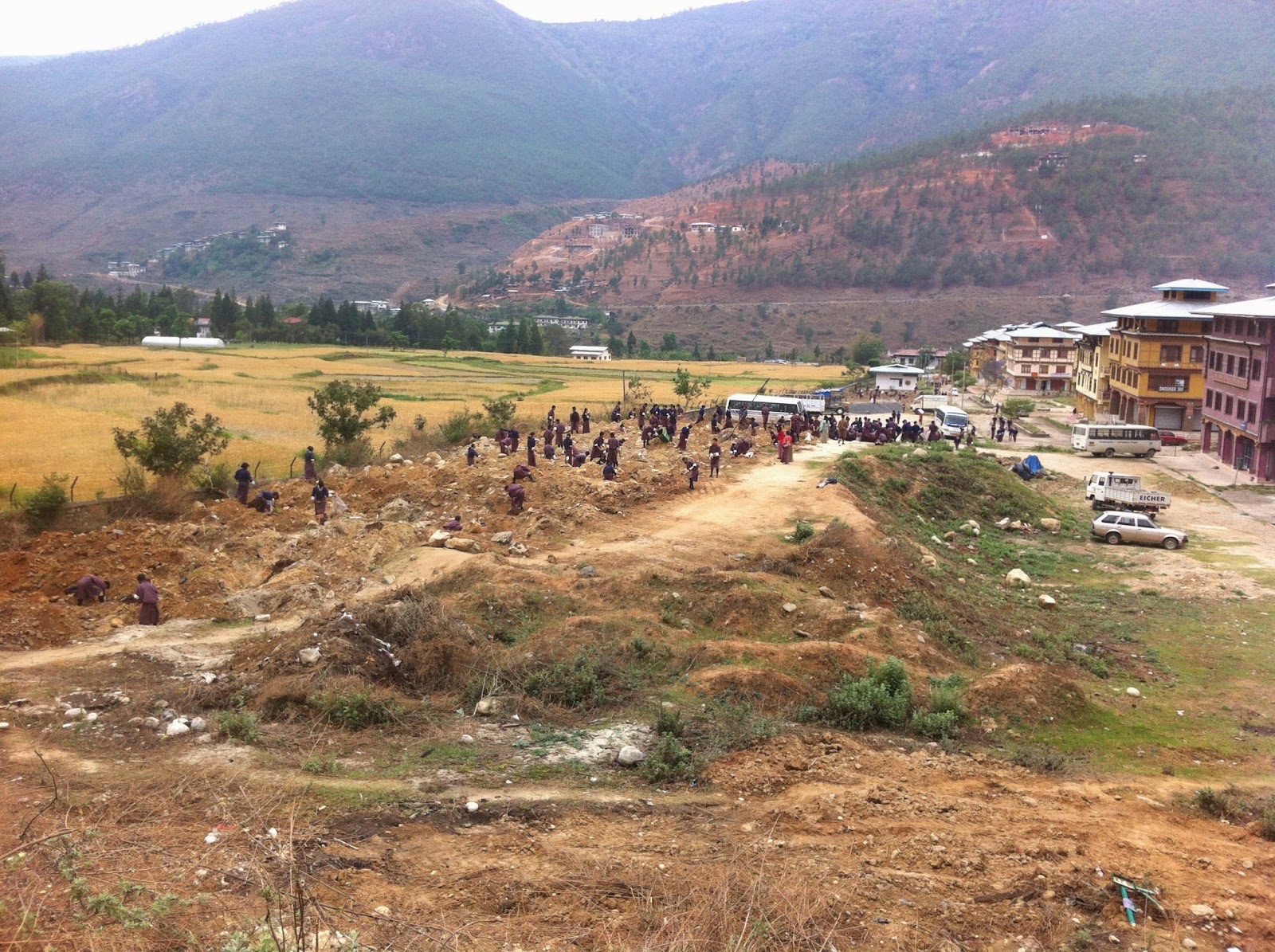 One businessman came forward to offer refreshment to our students, I was so happy with him but I declined because we had our own refreshment. He act of kindness and responsibility earn so much respect from me. But again only one businessman showed that mentality.

The 1,300 holes were dug by JCV, we should have rather dug them ourselves because we wasted as much time in filling the massive hole. We planned the program for an hour and it took was over three hours before we could finally return to school for cut-cake celebration. By then I was dead exhausted but the cake looked very refreshing until I realised that I forgot to pick up my daughter. I borrowed a car and ran with the cake on my dashboard. I thought it was once in a lifetime fun but at the end of satisfying event I got a few disappointed friends who hated me for taking them on plantation trip. But I bet students loved it and that's all that matter.
Happy Teacher's Day to all the teachers across the country, and to all my teachers who helped in shaping my life.