A Piece of History in Bajothang

Email ThisBlogThis!Share to TwitterShare to FacebookShare to Pinterest
There is an old traditional house standing in Bajothang School and it seemed to have been there before the idea of school came around it. The school itself was founded in 1997 and the building looked like it was there for ages. 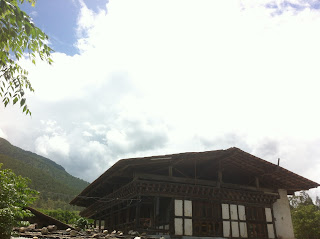 The old structure didn't receive any renovation and is slowly giving way to its unknown age. However, my school uses it for storage of books and sports gears, it also houses the Geography lab, and on the ground floor one huge room is used for carpentry and other equally big room is the school agriculture store. 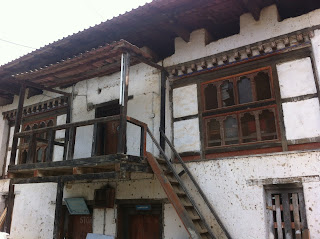 The new developmental plan has two huge structures coming up and to create space for growing numbers of cars in our parking, school has planned to demolish the old house to expand the parking lot. Aesthetically, the building is an eyesore in the beautiful campus and I was looking forward to the change.
However, one afternoon I had a history lesson from the contractor who was building our new structures. He presented a vivid picture of Bajothang some 40 years ago, with names of people who had anything to do with the old house, as if things happened yesterday. His father was among the men who had worked here and he happened to visit the place with his father.

It was during the Third King's reign, when idea of business was farfetched to Bhutanese, that his majesty, Jigme Dorji Wangchuk ordered the construction of the house. It was intended to be the business center for the people of Wangdue, Punakha, Gasa and probably even as far as Trongsa. It was the first known shop in the entire region, and was operated by people on rotational basis. Those day, the entire Bajothang was uninhabited and it was the first and only structure standing. His Majesty instructed people to come and settle in Bajothang but people found the land infertile and not many came, just like the history of Changlimithang.
The business center was later handed over to Tencholing Army and they handled the business until the shop shifted to a new location in Tencholing, currently known as Army Canteen. The man who sustained the business and flourished was granted Royal Kasho to run the business as Army Canteen for generations to come.
After the shop was shifted to Tencholing the house in Bajothang became the center for Agriculture, from where seeds and tools were distributed to people. When the center first brought in a power-tiller and did the demo somewhere near the present football ground, the news reached far and wide. Large number of people came with packed lunches and to see the 'Iron Ox' ploughing the land. 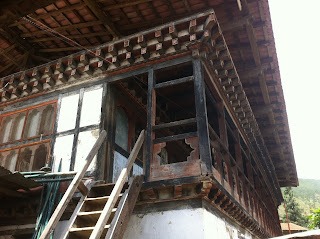 After hearing the story of the historical house, I went to my principal and shared it, but to my surprise he knew the history already because his brother had engineered the school back in 1997 from whom he learned. He gave me clearer details and when we were finished, the idea of demolishing the house seemed very brutal. We then discusses the possibility of converting the house into a Museum. Though the idea is wild and vague at the moment I strongly that the house deserves to stand there and tell tales of modern business in Bhutan.

***This is a weak attempt to write history, which was not written before, therefore I am in search of more information and old photographs. IF you happen to have please post them to my inbox.