How to Recover What is Lost in Gambling

Gambling is very addictive; it's easier to counsel a young drug addict out of his habit than to keep an adult gambler out of the game. Even bankruptcy can't stop a gambler. The winner wants to win more while the loser wants to recover his loss and there is no end to the race. I heard this before as a story, now I know a man close to me who is living this story I once heard. 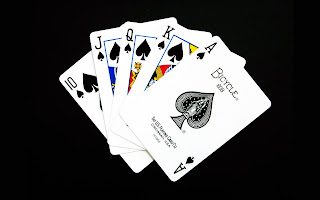 When he came to Wangdue to join his new job he was carrying a load of money, gratuity from his earlier job and other benefits. Like a smoker finds a smoking friend even in the strangest of place, he found gambling partners even before he could locate toilet in his new home. He wanted to buy a taxi to make his after-office hours useful but by the time I knew him closely his dream has gone into someone's pocket.

It was an expensive lesson he was supposed to learn but he was a bad student, he didn't learn. He has taken several loans from friends and bank only to see another taxi dream fading on the gambling table. Now he has enough loan to pay for next few years yet hope of recovering his loss drags him back to the people who peeled him off. Every month-end he reaches home late at night with long face and empty purse, and his wife has to go into hiding to escape from house owner when he comes around collecting house rent.

He grew desperate, he was going to either learn how to cheat like many others do, or he was going to seek support from astrologer but there is no sign of him giving up. That same day, by coincidence, an elderly friend of mine came by when he was discussing his desperate measures.

My elderly friend join the conversation with excitement, because he happened to be a survivor and his saviour was an astrologer too. He is now one of the richest man in Wangdue with property even in Thimphu. My desperate company grew interested in the story of gambler, astrologer and riches. Thus the rich elderly friend shared:


"I was finished, everything that was legally mine was gone and one day my wife left too, not because I was a poor man but because I wasn't ready to leave gambling even when I had nothing left to gamble with. That was when I went to an indian astrologer and show my empty palm. The sadhu at once told me that I had a leak in my hand, and that I had finished everything. I told him, I know this part of the story and that I wish to know if I will ever recover my fortune. He studied my palm carefully and eventually told me that I will be rich again. That was the sweetest word I heard in many day.
"I at once wanted to know how and when, I wanted him to tell me what kind of pujas I have to perform and what are my lucky days. The sadhu read my palm again for the longest time and said, 'Son, there are no pujas to perform, you are destined to be a prosperous man. All you have to do is, Just leave gambling and start working'.
"That was the turning point in my life. Now I have not only recovered everything but also built so much on it. And if you truly want to recover whatever you lost gambling is not the right choice. If you go to the best astrologer, he will tell you exactly this."